Be careful what you wish for- 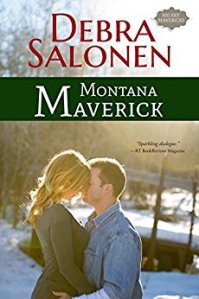 Meg Zabrinski wants a child. She’s a successful scientist, a well-known environmental advocate, and a tenured professor. She doesn’t need a man in her life to make this happen. But having a baby alone is a weighty decision, so she retreats to her isolated mountain cabin to write and think. When Henry Firestone–an old foe from her distant past–drops out of the sky on Christmas Eve with three young children and a baby, Meg tells herself she’d be crazy not to consider all her options–especially when she’s always nursed a secret crush on the handsome rancher. Although the sparks between them ignite a mutual passion, Henry makes it clear he’s done having children. Falling in love with Henry Firestone and his beautiful family would require Meg to give up her dream. Can the Lone Wolf assimilate into a new pack, or was this Big Sky Maverick meant to be alone?

They say timing is everything-
Henry Firestone doesn’t recognize the “angel in snowshoes” who comes to his rescue in the middle of a blizzard, immediately, but Meg Z. knows him. Twenty years earlier, the media paired them as rivals to the death. Meg championed the reintroduction of wolves to Yellowstone, while Henry argued just as passionately that wolves would put ranchers on the Endangered Species List. She’s still beautiful, independent and headstrong, and Henry’s now free to admit that he always had a thing for her. Unfortunately, he’s fighting for sole custody of his late daughter’s four children. They are his biggest priority. He’d do anything to keep his family together–even sleep with the enemy in hopes that she might join his cause.

I have been looking forward to reading Meg’s story since I started reading the Big Sky Maverick’s series. She was the strong one, the older one. The one who was a little bit gruffer than her siblings so I knew when she fell it would be spectacular.

Meg and Henry Firestone have a long history of disagreeing on a matter that impacted both of their respective careers. She spent her career fighting to re-introduce wolves into the wild which of course meant that animals on surrounding ranches and farms were in greater danger of being eaten by those wolves. So when his helicopter full of children crashes near her cabin I was ready for sparks to fly.

And boy did they ever!

Meg and Henry had a lot to deal with before they even started to deal with the attraction burning between them and the sizzling chemistry. And it was four things specifically that were Meg’s particular kryptonite; children.

I loved watching the way they all easily slid into family mode, cooking meals and splitting up kiddie duties. Dealing with sick and scared children who’d recently lost their mother was a lot to deal with while also struggling with their growing feelings. But somehow they managed to deal with all of that and find time to fall.

Based on previous Big Sky Mavericks books I really thought it would take me awhile to warm up to Henry but I loved him pretty much from the beginning. He was strong and scarred but the way he jumped right in with his grandchildren just warmed my heart. What I loved about Montana Maverick was that I really thought I knew where this story was headed—it is a romance after all. But there were at least two times that Debra Salonen threw me for a loop and it made the story all the more compelling.

This story was well written and I loved the descriptions, especially winter in Montana up at the cabin. And Meg was just a kick ass heroine. I loved her scientific brain and the way she approached her desire for children, and the ultimate solution was amazing and totally satisfying.

If you’re not familiar with this series I suggest you check out the Big Sky Maverick’s.