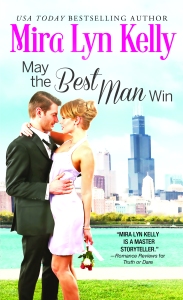 Jase Foster can’t believe his bad luck. He’s been paired with the she-devil herself for his best friend’s wedding: Emily Klein of the miles-long legs and killer smile. She may be sin in a bridesmaid dress, but there’s no way he’s falling for her again.

They can barely stand each other, but given how many of their friends are getting married, they’ll just have to play nice-at least when they’re in company. Once they’re alone, more than just gloves come off as Jase and Emily discover their chemistry is combustible, and there may be something to this enemies to lovers thing after all…

Ever since I read Waking Up Pregnant I have been a huge fan of Mira Lyn Kelly, so when I caught this book a few weeks back—for free!!—I scooped it up so fast.

There’s this stage in your late twenties, maybe early thirties where it seems like every single person you know is getting married. That means tons of bridesmaids dresses, margarita makers, bachelorette parties and the like. If you have a big ol’ 90210 group of friends, awesome.

If you loathe or can barely stand some of these, then you’ll empathize with Jase and Emily.

I won’t tell you why they dislike each other but I do feel that you need to be prepared for the fact that they really, REALLY don’t like each other. It’s so apparent in the first half of the book and neither of them tries very hard to hide it. I’ll admit (sorry Mira) that at times it became so bad that I just wanted to crack their heads together and tell them to talk it out.

But lo and behold…they did. Well sort of.

More like Jase stopped being a jerk and Emily stopped staring icy daggers at him. And when that happened, holy smokes ya’ll better watch out!

That’s what I love most about these two. Despite being mostly serious people with good jobs and all that jazz, they run absolutely arctic or flaming inferno HOT! It’s crazy, it’s fun and it is hotter than hell.

And before you think this is some insta-love type deal, you bite your tongue! That’s the other thing that I really loved about May The Best Man Win; the fact that both of them are much different people than they originally thought. It turns out they’re actually normal human beings who can, on occasion, do nice things for the other person. I have to confess though that I’m totally Team Emily because she was justified in her hate of Jase whereas his was more of a he said, she said situation even though He. Knew. Her. Yeah so as charming and oh so sexy as Jase was, he had a long way to go to make me a believer.

But he did and I got behind these two as a couple, so hard.

Did I mention that I loved this story? Because I did. A lot.

Now all I need to know is…when can I get another MLK story??