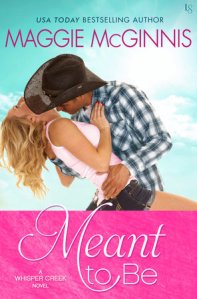 At twenty-eight, Shelby Quinn’s already a has-been. Scooped off a country stage at sixteen and remolded into glittery pop princess Tara Gibson, she toured the country for a decade, playing to sold-out stadiums while slowly losing her soul. Now her sales are waning, and when her beloved father dies in a fiery plane crash, she finally comes apart at the seams. Alone and brokenhearted, she hides away at Whisper Creek Ranch, never expecting to meet a man who understands her in a way no one else ever has.

Cooper Davis was one of Boston’s top detectives—until a bogus investigation cost him his badge, his family, and almost his life. Now he’s wrangling horses and guests at Whisper Creek Ranch, while keeping one eye firmly on a super-secret VIP holed up in a private cabin—a beautiful, soulful singer who knows what it’s like to lose everything. Cooper and Shelby both have ample reason to guard their hearts. But if they can learn to trust each other, something magical awaits them under the big skies and bright stars.

The premise of Meant to Be is what intrigued me. I get so sick of rock star and pop star stories that it’s nice to see this one about an almost has-been. Being a pop princess was never Shelby’s goal, she just wanted to sing her songs, but we know what labels do to pretty young things with a taste for fame. Shelby, well my heart goes out to her because she’s grieving and the people around her are trying to tell her how to grieve or modulate the way in which she grieves.

You know what I have to say to that…hell no!

Then there’s Cooper. Oh, Cooper, Cooper, Cooper. This guy is pretty darn amazing. He’s a former cop accused of something he didn’t do. The problem though, is that no one but his teenager sister believes him. He comes from a line of cops so now he’s feeling what it’s like on the other side of that blue line.

As you can see Shelby and Cooper have gone through some thangs in their respective lives, which is how they both ended up in big sky country. This was my first Whisper Creek novel and it’s the fifth in the story so we meet a few others who’ve already had their story told.

Maggie McGinnis wrote a really solid novel here. The writing was good, the characters developed with moments of laughter and tears and poignancy.

I just felt Meant to Be kind of dragged along at a pace too slow for me. I read it and enjoyed it but it felt like it took longer than it should. Part of that, for me, was Shelby. It took me a long, long time to warm up to her even though my heart went out to her over the death of her father, whom she loved very much.

She spent so much time complaining that people were always running her life—complaining as in she would like things to be different—yet when given the opportunity she does nothing of the sort. Even teenagers wait until they’re alone, the parents are gone before doing things they shouldn’t. But Shelby, nope.

And then everything picked up and I was grinning like a fool the entire last 30% of the book. The banter between Cooper and Phoebe, between Shelby and Cooper was all so hilarious and heartwarming and sweet as hell. If you would’ve asked me at 40% I would have told you “this is a good book.” But now I’m going to go back and start the Whisper Creek series from the beginning.

Maggie McGinnis you have a new fan in this girl!