Lady Caroline Alton is young, beautiful and in London for her first season. She is excited about her first foray into society, but family secrets seemed to be piling up around Caroline more and more each day. She thought she might discover the great secret in her own life one day, except when she did, she had a feeling that it just might change everything. When she meets Lord Thomas Steele at her home in London, she is immediately intrigued by the handsome, dashing young barrister, who is a friend of her father. Each time she sees him, she becomes more and more aware that he, too, is deeply involved in the secrets that surround her, and she sets out to prove to him that she has the courage to face whatever it is, and to stand beside him as he confronts the evil that threatens him.
Thomas, the youngest son of a Marquis, has been fighting an uphill battle against vampires most of his life. London is under attack and Thomas is the captain of the guard of Orion’s Shield, a clandestine group of vampire hunters sanctioned by the Prince Regent himself. Having been attacked and bitten by a beautiful and seductive vampire at a young age, Thomas struggles against the forces of darkness that have never stopped trying to consume him. An ancient and powerful evil has come to England, and a physical battle, as well as a spiritual one must be waged against it. If the battle is lost, it will leave Regency England vulnerable to hell on earth. And yet in the middle of the fray, two souls try to find their way both to the light and to each other before the darkness destroys whatever happiness they may find.… Can love truly conquer all, or will evil consume them both?
Enthralled is a debut novel by Elizabeth Jordan. It is a clean and sweet historical regency romance novel of approximately 62,000 words. No cheating, no cliffhangers and a guaranteed happily ever after. 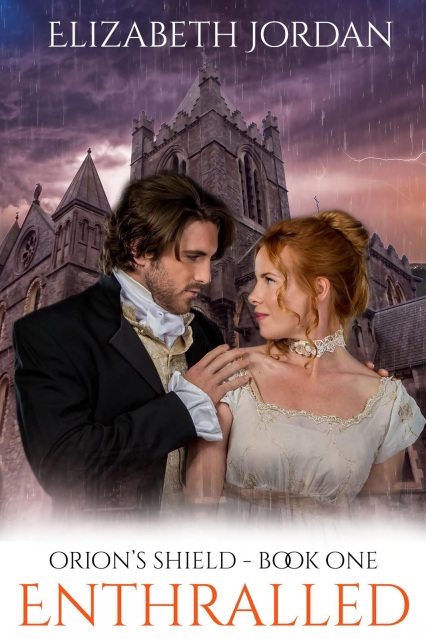 Helton suddenly ran straight at William but instead of punching him like a man would, the vampire jumped up in the air and kicked him, sending him soaring to land several feet away, next to the table where only moments ago, they had sat conversing. William hit his head hard on the wooden table, then fell to the ground where he lay as if lifeless.Richard moved quickly to his side. “He’s alive!” he yelled. “Merely stunned, I think.”

“The great Earl of Tenbrey,” The vampire taunted, “An heir, but no soldier, I think.”

Caroline pulled another stout branch from the fire, putting it in Thomas’s hand.

He received it without looking at her. “I am Thomas Steele of Cranbrook, and his brother. I tell you this, because I think it only right you know who takes your worthless lives this evening.”

He glanced behind him at Richard, Farley and the others. “Leave none of them breathing.”

Richard looked over at Caroline with desperation and despair. “What about my sister?”

“She’ll die alongside us if we don’t act.” Thomas answered. “Now, Richard.”

With one last glance at Caroline, Richard ran toward them shedding his coat so quickly she hardly saw him moving. Before her astonished eyes, he transformed into one of the creatures himself, his wings ripping through his shirt. At the same time, Thomas and the other men leaped forward. Several of them had stakes in their hand that they pulled from their boots. Thomas went first for the creature he had called Helton and thrust the burning stick Caroline had given him through its heart. The thing disintegrated and fell on the ground as it turned to dust.

Richard had attacked the other man, but more were coming from the trees and the men from the party were engaging them. Caroline grabbed Julia, who had been watching with rapt attention and a strange smile on her lips. “Help me with him!” she cried and pulled her toward William, who was still out cold.

“Stay there beside him,” Caroline ordered, pushing her down to the ground. She thrust the stake she was holding in Julia’s hand. “Use this if they come for you,” she said and looked around for another weapon. The servants had stacked a few of the bows they had been using for practice near the house, and she ran to retrieve one of them, then she said a very bad word she’d only heard her father say once when he slammed his finger in the carriage door. They had already removed all the arrows.

She remembered then the one Thomas had given her as a good luck token. She snatched it from the ground near the overturned table, as she heard the screech of one of the creatures close by. Another one had landed behind Thomas and was stalking toward him as his attention was on the fighting in front of him.

Caroline notched an arrow into her bow and held it at the ready. “Thomas!” she cried. “Behind you!”

Thomas whirled around and used the stake he had in his hand to stab the vampire behind him, who fell to the ground in a quickly rotting heap of flesh. And when the creature fighting Richard realized both his companions were dead, he screamed, “No!” and retreated rapidly to the woods.

The two or three remaining vampires ran a few steps and then took flight, Caroline took careful aim at the one closest to her. She drew back her arm and put an arrow in his right shoulder. The creature screeched in pain as it disappeared into the night.

Thomas, her brother and every other man there stared at her in surprise.

She shrugged. “I am unused to a moving target. I aimed for his heart.”

Elizabeth Jordan is the pen name of two award-winning co-authors, who write in other genres of Romance, but who both share a love of Regency and Georgian England and the best traditions of Romance. They live in the American south and both are happily married with children. Both of them believe in happily ever afters.

My Tweets
The Hermit Poet's Ramblings