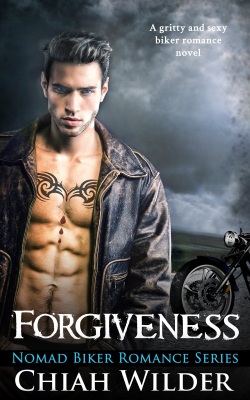 Nomad biker: a solitary life, riding from place to place.
Flux once wore the Insurgents MC patch and his territory was Colorado. Now his bottom rocker reads Nomad.
The open road is Flux’s therapy and facing a 1500 pound bull in the rodeo ring is the way he blocks out the memories. One-night stands, booze and plenty of weed have done a damn good job at keeping his heart locked up.
Until he meets a sassy barrel rider.
The golden hair vixen runs rings around him faster than she rides her horse in the arena, and he can’t keep away from her. For the first time since the unspeakable tragedy happened, something stirs inside him.
But he has a long iceberg of guilt that he doesn’t want to get rid of. He’s chosen to live with it as a reminder of what has happened. Couple that with a bunch of inner demons that don’t play nice and he’s nothing but a shell of who he once was.
Maggie Haves hasn’t known anything except the discipline of practice. Touted as one of the best barrel riders to hit the rodeo circuit, Maggie doesn’t have time for anything that will veer her off the pro rodeo trail.
Rugged, tatted and muscular Flux is a very big distraction. Not to mention complicated beyond belief.
Flux has lived on the wild side most of his life, whereas Maggie has always played it safe. She knows the biker is danger in leather, but she’s drawn to him like a moth to a flame. Something about him keeps luring her, and she’s willing to take a chance on love with this imperfect man even if it destroys her.
Will Maggie be the one to show Flux that he deserves to live again … and forgive himself, or will his demons devour her before he throws her away?
Can two unlikely people find love in the midst of so much darkness?
The Nomad Biker series are standalone romance novels. This is Flux’s story. This book contains violence, abuse, strong language, and steamy/graphic sexual scenes. HEA. No cliffhangers. The book is intended for readers over the age of 18.

“had me hooked from the start!” – Coensk Reviews


“Excellent writing with a storyline that weaved its way into my soul. A must read.” – Spunky n Sassy Book Blog

The screech of rubber caught his attention, and he side-eyed over to the commotion as a cherry-red pickup truck pulled into a spot, spitting gravel in the process. The ignition jerked off with an audible hitch that bounced across the parking lot, and Flux weighed the idea of heading out to the bar now. The truth was, he wanted to get back on his Harley—even the smallest ride cleared out his skull for a couple seconds. His fingertips were already itching to clutch the vibrating handlebars as he sat there turning it over in his brain.
His attention got shot to shit when a curvy blonde hit the pavement from the pickup’s driver’s seat and slammed the door. Flux homed in on the lucky SOB who got to stare at the chick’s tight ass in those jeans when he came out of the other side of the truck. The man, who was wearing cowboy boots and a hat, hissed something barely audible—a faint echo across the air. But whatever he said must’ve had something to do with Blondie because she squared her shoulders and threw the cowboy a death stare. After a few seconds, the chick sashayed around the car in sky-high heels, which made her wavy hair sway back and forth across her back.
A low growl came from the back of Flux’s throat. Come on, baby. Turn around so I can see the rest of you. The woman pointed a finger at the man, and even though Flux couldn’t hear their argument, there was no doubt it was heated. Blondie was right up in the dude’s face, and she was giving it as good as he was—which was impressive considering Cowboy had a good foot on Blondie. When the dude raised his arm with his hand clenched into a fist, Flux straightened up as a shot of adrenaline surged through him. If this jerk had any idea of hitting this chick, Flux would make sure the asshole would spend the rest of the night in the emergency room. No matter what the situation, Flux never tolerated that shit, and he wasn’t about to make an exception now. 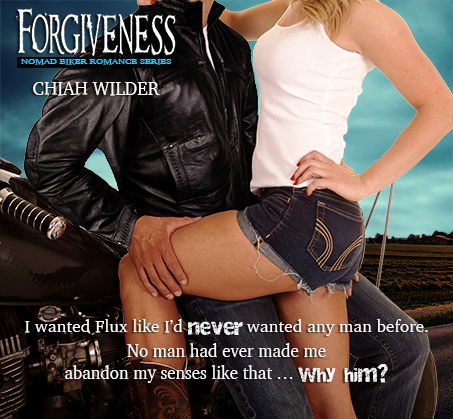 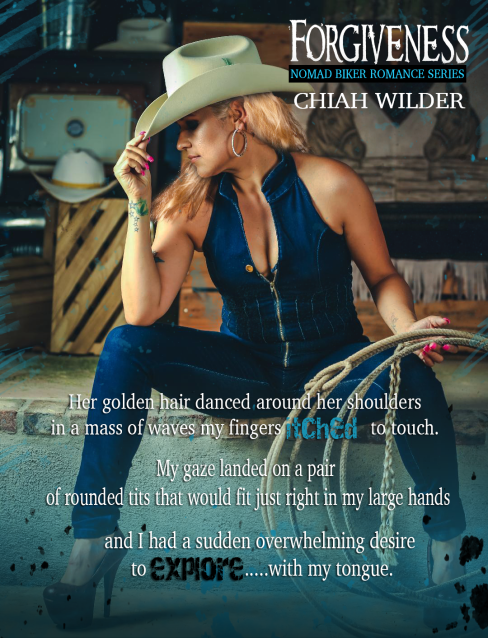 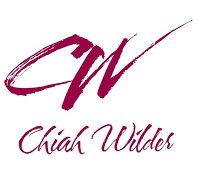 Chiah Wilder writes about rough, sexy men who know how to treat their women.Always a lover of books, she began writing at a young age and continued through college with collections of short stories. Figuring she had to grow up and get a “real” job, her writing was placed on the back burner.

Her love of reading has always been center front in her life. Chiah’s love of bad boys both in and out of fiction has inspired her books. She loves an alpha male whose softer side is brought out by a passionate, spirited woman. In fiction there are no rules or boundaries, and fantasies can go as far as the characters want to take them. Steamy, romances with tough, sexy bad boys are her guilty pleasure along with brownies, cheddar cheese, and movie marathons. 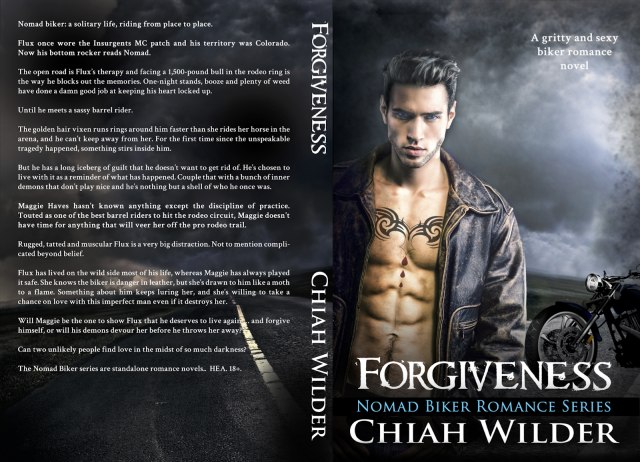 One thought on “BOOK TOUR!!! ~ Forgiveness by Chiah Wilder”