She’s their last hope in a war that’s been brewing since before she knew who she really was.
After successfully taking back Falcone Industries, Jules is forced to come to terms with who and what she truly is. With the help of Seeley Ronan, her Vampire King, Jules learns what it means to be not only a vampire hunter, but a leader and a warrior as well. In the process, their attraction grows into a relationship that neither of them can deny. But being together isn’t an option in their world.
Seeley and Jules’ personal dilemmas take the backseat at the emergence of Mathias Morgenstern, a Vampire King on the verge of starting an all out war. If left unchecked, Mathias will rise to a powerful position that most won’t survive.
Vampires, Hunters, Guardians, and Fae alike are just a few of those that have gathered behind their new leader to overthrow an evil that threatens to consume them, and the rest of the world if they fail. Will Jules unlock her potential to save them all, or will evil overpower her with a sorrow she thought she’d never have to experience again?
Don’t miss the stunningly captivating conclusion to the Alliance of Power Duology, perfect for paranormal romance fans of Charlaine Harris and Laurell K. Hamilton!

The doors to the room flew open, and a domineering man snarled as he entered. “Kellan! Lucian! So help me you had better be right and have gotten to her after you let him get away.”I stared, wide-eyed, barely breathing as the tall man entered the room. His dark hair was combed and gelled to the side, slicked back in a perfect fashion. He wore a gray button-up shirt that had the top few buttons undone, with the sleeves rolled up to his elbows. His black slacks hung fitted around his waist and the pants followed his movements perfectly, like they were made just for him. The veins in his forearms and exposed neck were visible as he yelled in anger at Kellan, and the man next to me, who I assumed to be Lucian.

This man was terrifying, but incredibly alluring at the same time. I knew he was dangerous, I sensed it, but his appearance made him come off like he was a handsome superstar, instead of a threat. I was confident he was a vampire. I was also confident he probably didn’t have a hard time catching his prey looking the way he did.

The man next to me finally stopped muttering incoherently and stepped back, giddy with excitement as he turned to face the man who had just entered the room.

“My King, she’s here.” His voice held a reverent tone.

The man’s attention snapped to me, and the left corner of his mouth turned up. He stalked toward me slowly and bowed his head, searching my eyes, or Kellan’s because I wasn’t sure if I was actually here with him.

His finger slipped under this body’s chin and a cold sensation of fear tingled down my neck.

“Jules Van Helsing. We’re about to have so much fun together.” I shivered as he leaned in closer to my ear. “Come to me now, or Seeley Ronan dies.”

“No,” I gasped, feeling like I was being pulled away suddenly. I had to get away. I had to wake up. This was a nightmare, a terrible nightmare.

My eyes snapped quickly back to the man before me and widened in shock.

I was staring at Mathias, and he knew who I was. I screamed. 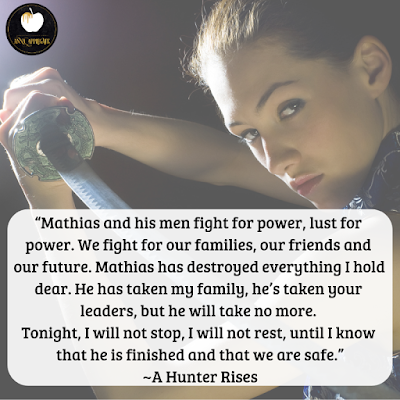