Why is this woman a look-alike of one of the president’s daughters?
Set in a beautiful island country in Italy, Bianca Lucchese and her husband Joe work hard at their veterinarian practice, raise their kids and keep their marriage vibrant. But two interfering mothers bring them to the brink of separation. When Bianca meets Andraya Manwaring, her life falls apart and Joe isn’t there for her. He’s left her at the worst possible time in her life—when she discovers she’s the long-lost daughter of a US president. 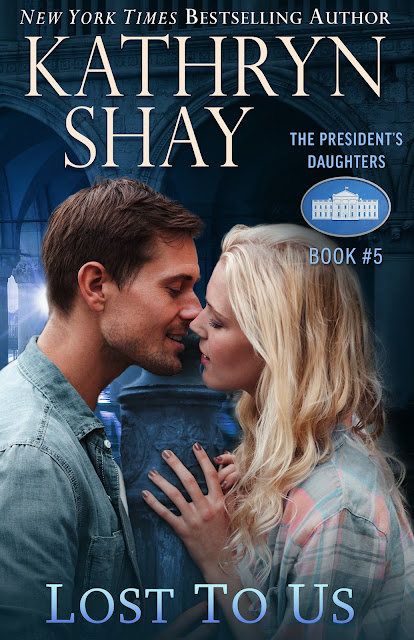 The end of August

“We have to talk.” Joe made the statement in the office of their veterinarian practice before their workday began. It was a light, airy space, with carefully chosen wooden desks, file cabinets and a long couch on the far wall. She’d brought in fresh flowers so the scent of calla lilies surrounded them.

Bianca’s eyes narrowed in feigned anger. “Is it about those secret meetings and phone calls you’ve been having? I swear Giuseppe Nicoli Lucchese, if you have a woman on the side, I’ll castrate you.”

“As if, Tesoro.” For a moment, his dark eyes danced. “I haven’t looked at another woman since you fell into my arms coming down the steps of the administration building at college.”

Bianca knew that was true. The same thing happened to her. Love at first sight. And lots of lust, too. They couldn’t keep their hands off each other and were together every minute they could manage. “All right. Tell me.”

He got that shadowed expression on his face that usually meant he had bad news. “I accepted a request from Veterinari All’estero to inoculate wildlife in Africa.”

“I’m going to work with the vets over there.”

She frowned. “We were planning to do that together, sometime later, when the kids were older.”

“I have to go now. Running our home and practice throws us together too much.”

Merda, this was so unlike the past where they skipped classes to make love and he moved out of the dorm and rented an apartment for privacy and convenience.

She stared at him. She loved him. But… “So you’re going to run away from our problems?”

He stood, came around his desk, leaned against the edge and jammed his hands into his jeans pockets. Damn him for looking so good. “You’re not listening, amore mio. We need a break from each other. I know I need a break from the pressure our Mammas put on us. We fight all the time about them.”

It was painful to hear what he was saying. There had been a lot of pressure and it had affected their relationship. Her voice was hoarse when she answered, “So I get to stay here and deal with them all by myself?”

Joe’s brows knitted. “Mamma will leave you alone if I’m not here. Maybe me being gone will make her listen to me about interfering in our lives. But, yes, you’ll have to deal with your mother.”

Carlotta Ricci was a force to be reckoned with. Since Bianca’s papà was never in the picture, she and her mother had been close. Very close. Too close. And Carlotta never liked Joe, but down deep Bianca knew she wouldn’t approve of any man her daughter had chosen.

She made herself sound strong. “I’ll handle Mamma. What about the practice?”

“Christopher will take on more responsibility.” The fresh-faced, sweet man, Christopher Messina was just out of vet school when they asked him to join their team and had been a joy to work with.

“We hired him so we could open a second office.”

Her eyes filled. “I can’t believe you’d do this to me, Joey.”

“Bianca, cara, we need time away from each other!”

“You do, too. And this way, we won’t have to explain a separation to the kids.”

“And you won’t look bad.” She stilled as another awful truth came to her. “You were thinking of a separation?”

“No, no, that came out wrong.” He took in a deep breath. Stared at her with midnight eyes that made her weak in the knees. “I’m going, for three months, starting in September.”

She tried to calm herself. “Not with my support.”

“Cazzo! You don’t give an inch anymore. What happened to the girl I married?”

“She was deliriously happy when she met you. You promised life would stay that way for us. We opened a successful practice, had two kids we raised together. Then you got distant.”

She loved this man above all else. She often consented to what he wanted to do in their life together. But she was mad! “All right, Joey, go ahead. Leave the three of us alone.” Even to her own ears, she sounded totally rejected. In the past that would have killed him.

“Will you give me your blessing?”

“What do you think?”

Joe couldn’t concentrate all day. Even though he’d had several wellness checks, two sick puppies and a consultation about surgery, he was distracted. Not only had he hurt the only woman he ever loved, he’d sounded like a selfish bastard.

I need to get away…I want to go…

But deep inside he knew that his marriage was heading for disaster if he didn’t shake things up. And he wasn’t sure he could live without Bianca in his life.

The fights had been epic.

“You are subservient to him, figlia mia. I warned you against this.” Still tall, imposing and statuesque at sixty-plus, her silvery gaze was cold.

“He always gets what he wants.”

“Because I want it too.”

Her mother stared her down. Bianca knew an ace in the hole was coming. “Did you want another child?”

“I wanted to talk about it.” And Joe didn’t. So the idea got dismissed.

“Not that I thought having another was the right thing for you, but you had no choice when he objected. He takes that away from you.”

“Joe likes our life as it is.”

“I do.” His comment came from the doorway. “And Carlotta, I don’t appreciate how you hound your daughter. I’ve told you this before.”

“This is my home. I’ll speak however I want in order to keep you from hurting your daughter.”

Bianca said, “Joe, I can stand up for myself.”

Angry, he’d whirled on her. His eyes burned. “Then why don’t you?”

Then there was his mother, Rosalina…

“You work too hard, Joey, and afterward, you run around with i figli. Your wife should stay home and take care of them and the house.”

He’d crossed to the woman who’d raised him. Who he loved dearly. “Mamma, I know that’s how you did things in your marriage, but that’s not us. Not most people in Italy these days.”

She touched his face and he could see the veins of age in her hand. Small in stature, a bit overweight, she had the same dark eyes and hair as Joe, though hers was graying. “You need more sleep. More relaxation. If she quit, you’d have peace.”

It was as if he hadn’t spoken. “Santa Maria, you don’t listen to me. Bianca’s not going to give up her career. I don’t want her to. Now, I won’t talk about this again.”

But they had. And more than once he’d found her pressuring Bianca. His wife didn’t cower in front of his mother, but Rosalina triggered something in Bianca that made her not fight back very hard. That probably had to do with her own mother’s strong personality. He and his wife became more and more estranged.

They were getting ready for sleep. He noticed lately she’d been changing in the bathroom. He was stretched out on the bed, with his hands linked behind his head, wearing only his boxers, watching the overhead fan whir around. She came out in a nightgown buttoned up to her neck.

He said simply, “I want to make love.”

“You haven’t felt like it in weeks.” Even now after nearly twenty years of marriage, sex had been frequent and imaginative.

“I know I haven’t.” She walked to a dressing table, sat down and began to brush her blond hair. She saw him in the mirror when he came up behind her. Put his hands on her shoulders. “You won’t make love with me because I’m going to work with Veterinari All’estero.”

She held his gaze in the glass. “That’s right, Joe. This chasm between us opened up when you said you were abandoning us.”

Fury rose inside him. “You always said you hated when women used sex to manipulate men.”

She turned around forcing him to step back. Her gaze narrowed on him. “I know. And I never thought I’d feel this way about you.”

“What are you saying, that I killed our sex life?”

“Harsh, but probably true.” She stood and didn’t meet his height by six inches. “It’s not my fault that I no longer want you. It’s yours.”

He was so angry he didn’t know what he’d do if he stayed. He stalked to the hamper, redressed in his clothes from the day, and stormed out of the room. He walked over to the street where his childhood friend, Tommaso Galati, lived and slept on his couch on the porch. He left the next day when he and his wife weren’t speaking to each other.

A NEW YORK TIMES and USA TODAY bestselling author, Kathryn Shay has been a lifelong writer and teacher. She has written dozens of self-published original romance titles, print books with the Berkley Publishing Group and Harlequin Enterprises and mainstream women’s fiction. One of her firefighter books hit #20 on the NEW YORK TIMES list. Her novels have been serialized in COSMOPOLITAN magazine and featured in USA TODAY, THE WALL STREET JOURNAL and PEOPLE magazine. There are over ten million copies of her books in print and downloaded online. Readers call her work heartwarming.