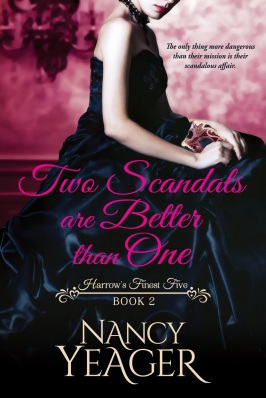 A foray into London’s seedy underworld will unmask their hidden desires.
A gentleman on an illicit lark
Edward, the upstanding Viscount Meriden, is desperate for one reckless adventure. After years of holding his crumbling family together, he finally has the chance at one night of abandon at a debauched house party, where he meets a masked mystery woman. He longs to uncover all her secrets. But when he realizes she’s an old friend on a dangerous mission, he insists on becoming her protector.
A lady on a dangerous quest
Miss Lucinda Wagner is the only woman in a family of men rumored to be spies. When her father goes missing, she infiltrates a treacherous world to find him. No one suspects her double life until her childhood friend Edward discovers her secret. Now “Steady Eddie” insists upon watching over her. To gain his silence, she allows him join her search.
A journey into the belly of the beast
As Luci and Edward delve deeper into the criminal underworld, their lives turn upside down. Danger lurks around every corner. Threats assail them from all sides, and the only safe harbor in the city is in each other’s arms. Until the sparks between them threaten to ignite their long-denied passion.