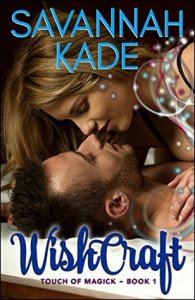 Delilah has spent the past year doing what she does best: casting simple spells and trying to get over a heartbreaking betrayal. In doing so, she’s become a not-so-good witch. Picking up men and making them forget her is easier than getting involved.

Brandon can’t remember anything after he left the bar. He has only a foggy memory of a blond and a craving for pumpkin muffins. When he finally figures out what happened that night, he realizes he has to find the woman and break the spell on him. He’s after Delilah, even if he doesn’t know quite what for.

But Delilah isn’t fast enough, and Brandon knows he’s been had. Still, two can play that game! Can he play it without losing his heart?

Meet the Goodmans, a family of modern-day witches in Los Angeles. Follow them from Hollywood Boulevard to the beach, from heartbreak to true love. This series has real emotion, hard won happy endings, and smoking hot romance.

WishCraft is the story of Delilah and Brandon. She practices magic, but not in a point hats and brooms kind of way. Just in a way that allows her to have a little bit of fun between the sheets with a handsome stranger…and have him remember nothing of it the next day. Until she meets Brandon, a good guy, a handsome guy. A guy on whom her little spells doesn’t seem to work. He can’t remember everything, but he also can’t forget some things and it all leaves him worried and intrigued. That is the beauty of Savannah Kade’s modern romance. It is a unique twist on the modern one night stand and the contemporary witch trope, but that’s also what makes it a fun read.

For me, the star of WishCraft is Brandon. He seems like a pretty straightforward guy who takes mostly reasonable steps to figure out what was wrong with him, and the addition of his friend Dan, added a much needed dose of humor. Brandon was a good guy, and he made a few missteps but his intentions were pure. Delilah though, was harder to like for me. She wiped people’s memories and was unrepentant about it, which made it difficult to understand her motives. The one flaw in this story was that the author, Savannah Kade, waited too long to reveal the WHY behind Delilah’s behavior. We get a tiny glimpse, which honestly didn’t make her all that sympathetic. And by the time we do get the big reveal, I found it hard to forgive her. Aside from that small thing, WishCraft was a fun story with a unqiue twist.