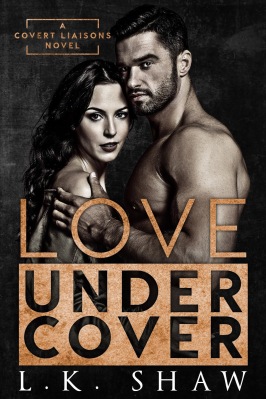 I can’t help my attraction to Tomás, a ruthless, gorgeous member of the Juarez Cartel. The only problem? I’m the undercover cop here to bring them all down.
I’ve immersed myself in a world of money and drugs, and there’s no one I can trust. Especially not Tomás. Yet time and time again we cross paths, fighting the inevitable. Until one explosive night when we can no longer fight the dangerous attraction between us. I run through every possible scenario, trying to find a way to make a relationship between us work.
What I don’t realize is that Tomás is hiding behind a mask of his own, and the connection we share could be deadly.

END_OF_DOCUMENT_TOKEN_TO_BE_REPLACED

Unforgiving.
Relentless.
I’m to be feared.
When your family is as much a friend as an enemy, there is no one to trust.
I am Javier Almanza.
Cartel kingpin.
No one can touch me.
No one can hurt me.
Except her.
Mari Belle Dominguez. 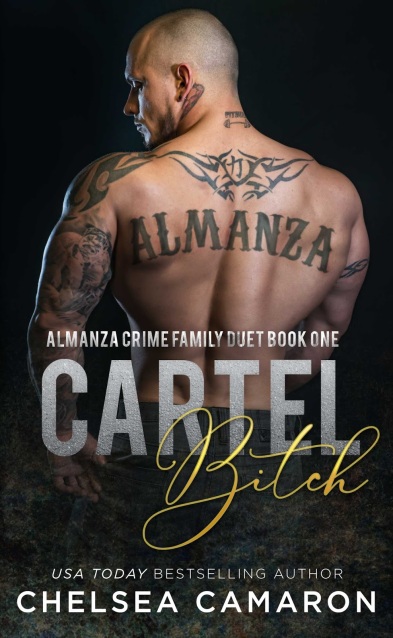 “There are betrayals, lies and a story that you will definitely want more of.” – Michelle Shelly

“It is without doubt an absorbing story that grabs your attention from the very beginning.” – Robyn Corcoran

“OMG this book had me hooked from the get go!” – Amanda 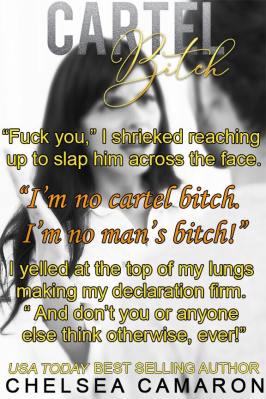 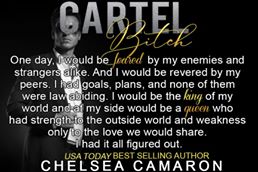 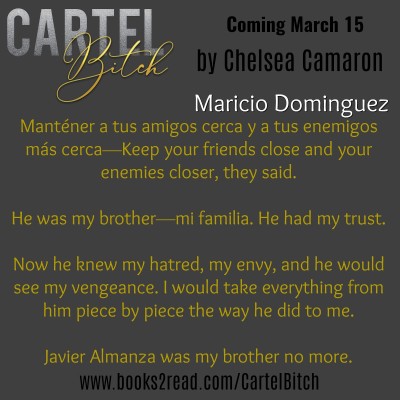 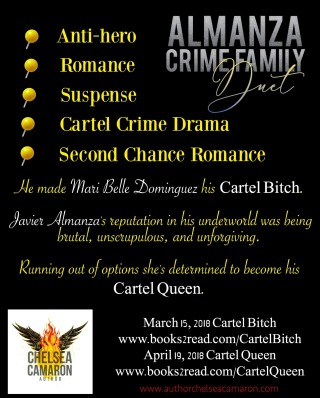 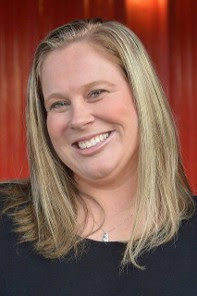 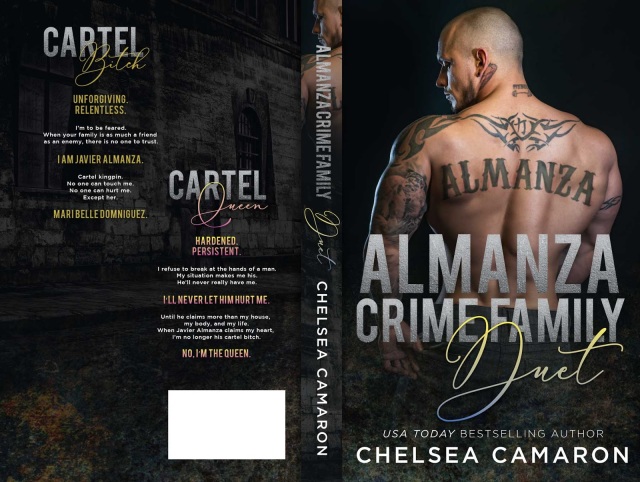 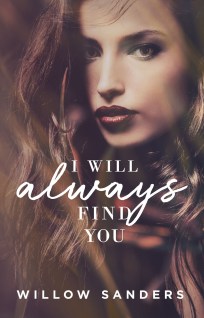 I Will
Cammie Saint isn’t a victim. Sure, she’s had a string of bad luck, the apartment break in then the attack in the parking lot. Sometimes life hands you lemons. Why is everyone so interested in her case? Even the new neighbor is sniffing around for clues. There are things she wants from the neighborhood Officer Hottie, but an interrogation wasn’t what she was thinking of.
Always
That’s Special Agent Vaughn, DEA. Of all the places he thought he’d be, Kansas City wasn’t one of them. Chasing Jefe for the last seven years had expelled the last bit of tolerance he had for chasing down bad guys. To say he was ready to put this case to bed would be like calling World War 2 a minor disagreement amongst countries. Jefe had taken too much from him. Time, and other things he didn’t want to get into. He just needed to keep his eyes on the ball and definitely NOT on his new neighbor with an ass for days and a sad story.
Find You
Why is the Jefe cartel in Kansas City? A Colombian drug ring in Anywhere, USA? While Agent Vaughn searches for answers, Cammie finds herself thrown into a world she never expected. How will secrets from her past, compromise her future? What happens when someone who never wanted to be found, is discovered?
I Will Always Find You is part one of a two-part series. Fair warning, it ends on a cliffhanger. 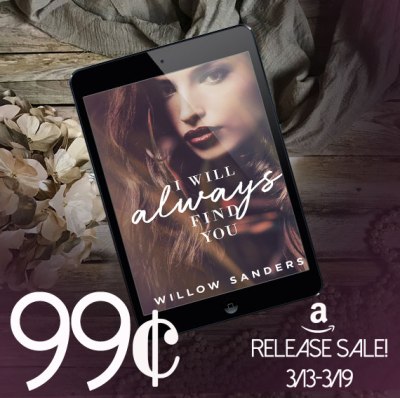 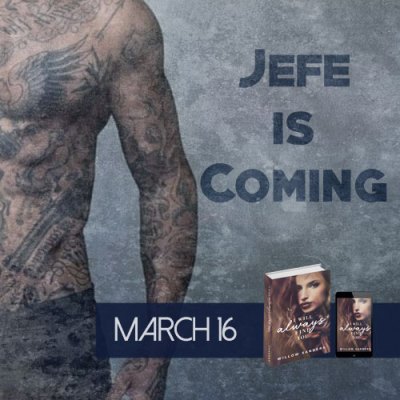 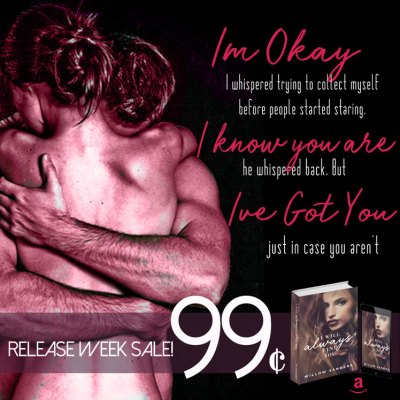 Willow Sanders is a Chicago girl born and raised. You will find that most of her stories are either based in or somehow tie back to the city she knows and loves. Her loyalties lie on the North-Side, as she proclaims she is a Cubs fan, and a fan of anyone playing against the White Sox. She can also be found regularly rooting for the Illini–even if the team is completely hopeless.
When she isn’t writing (in the physical sense- as stories are always brewing in her head in some form), she can regularly be found feeding her coffee addiction at the Green Mermaid (otherwise known as Starbucks). She is also a voracious reader and is quite certain that there is a glitter-encrusted picture frame bearing her headshot somewhere on the wall at Amazon that says “this woman pays our salary.”
You can also find her frequently stalking Goodreads, Pinning, FaceBooking, or hanging out on the Twitter.