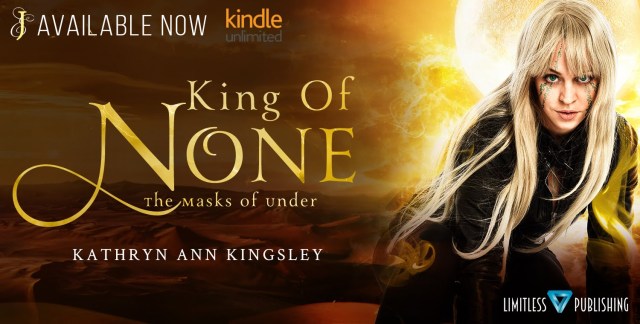 The Ancients are free.
All bets are off.
With the rise of the primordial creators of the world of Under—a place I only recently accepted was now my home—everything changed. The sun rose. Dusts and sands came to wipe everything away. Including Aon.
I learned his dark secret that moment that the sun peeked over the horizon. We all used to be human, once. Even Edu and the others. But not him. He’s the only soul ever made by the Ancients…and it left his mind shattered and broken. But the Ancients have made him whole. And I’m not so certain I’m glad that they did.
And who stands before me now is the King of All.
Aon was a madman and a warlock.
This man might be worse.

END_OF_DOCUMENT_TOKEN_TO_BE_REPLACED

The blood of my friend is on Aon’s hands, a King who would do anything to protect me. He believes his actions are justified because of a prophecy by the Ancients predicting my undoing by the hands of a friend.
I refuse to accept it. Nothing can justify what Aon did, what he took from me.
But as one threat is buried, another arises. The other Kings and Queens of Under are waking up from their crypts, and a war among us is imminent. The need for revenge and power is driving immortals to the brink of madness.
While the other Kings and Queens of Under are blinded by their own selfish conquests, something big and more dangerous than anything we’ve ever faced is about to shake Under to its core.
There’s one King who seems to hold the key to it all, the answers to our fate. A white-winged angel, a legion whose mind is made of a thousand souls with magic strong enough to hold the Ancients captive at the bottom of the pool.
The King of Blood.
I just need to determine whether he’s an ally…or the worst enemy Under has ever seen.

END_OF_DOCUMENT_TOKEN_TO_BE_REPLACED

When I was a child he brought me back from the brink of death. Since that day I have borne his mark, a black star in the center of my left palm. The villagers say it brands me as evil. I think it means something far worse. It marks me as his.
The disease that nearly killed me has returned to the village and children are dying. I’m the only one who dares to climb the mountain and learn his secrets. In exchange I’m to clean his house and help with his strange experiments, but Meremon wants more. He wants me. And it isn’t long before I discover that his demands are as twisted as his experiments.
Warning: This story is a dark fantasy romance with scenes of non-consent and dubious consent. Additionally, Meremon is a necromancer and enjoys unusual things. Some sex scenes might be strange or creepy for some readers.
As always with Brianna Hale books, no cheating, and a guaranteed happily ever after. THE NECROMANCER’S BRIDE is a novella of 16,000 words.