Never did I think a girl like Gretchen Hawthorne would be the woman of my dreams.

She is stubborn, irritating, and can piss me off at the drop of a hat. But she is also sweet and has a vulnerability about her that she doesn’t allow many to see.

She let me in for a split second, and what I found was even more than I had bargained for. Her façade is nothing more than a mask to hide her fears.

One wild night in the barn at my cousin’s house, and I’m hooked.

But she also has it in her head that she and I will never work.

Which is ridiculous, and I vow to prove her wrong.

I’m Colton Thomas, and I’m stubborn too, and I do not give up easily.

She better hold on tight because I’m coming for her. And I plan to break down all those walls she’s built so high around her.

END_OF_DOCUMENT_TOKEN_TO_BE_REPLACED 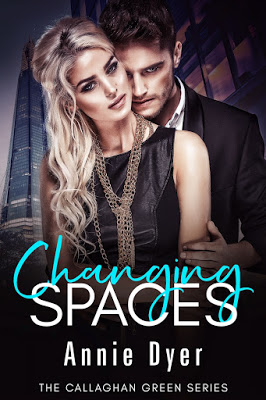 She said one night. He said more. She should’ve known better than to argue with a lawyer.
Ava Callaghan was never going to be just one night. She was going to be more, much more. She just didn’t know it yet.
Hotshot lawyer Elijah Ward can’t be interested in his friends’ and colleagues’ little sister. With his long-term relationship over, he isn’t looking for anyone, including off-limits Ava Callaghan with her long blonde hair and zest for life that eclipses everyone around her. She’s the daughter of his old boss and the sister of his new one – not a good career move.
She and Elijah can be for one steamy night only. Settling down isn’t on Ava’s agenda: the only thing she’s planning on settling is the foundations to another refurbishment project.
But one night is never going to be enough, not when Eli has as much mastery in the bedroom as the courtroom, and Ava has to decide whether it’s worth changing the space around her so there’s room for him.
A life-changing incident, family shenanigans and a persistent ex-girlfriend are enough to persuade anyone to close the door and walk away. But Eli isn’t the type to let what he wants walk off with his heart.
Eli Ward argues a good case for making their space a joint one. The question is will she let him win?

END_OF_DOCUMENT_TOKEN_TO_BE_REPLACED

Can her light overcome his darkness?
Bailey Woods is perfectly content living the single life. After being disappointed by men one too many times, she completely gave up on dating. Until she volunteers to spend time with a lonely horse and winds up working with the surliest man she’s ever met. So, why can’t she stop thinking about him?
Ryder MacAlister has three rules: no girls, no mistakes, and no slowing down. And Bailey is about to make him break all three. From the moment he met her, he felt this undeniable attraction. Fighting it is pointless, but he knows he needs to keep his distance. His past is as sordid as his future and he can’t let anyone else get mixed up in his problems. Especially Bailey.
She can’t resist a challenge and is determined to break down his walls for a single night. But what happens when she sees behind his gruff facade? Will Ryder’s past prevent a future with Bailey? Or could she be what he’s needed all along?

END_OF_DOCUMENT_TOKEN_TO_BE_REPLACED

Welcome to Crimson Elite, the most exclusive sex club in the world.
Enter at your own risk, and always remember our number one rule—
You must never speak of Crimson Elite—the punishment is severe.
Creed ‘Too Hot For Words’ Christopher
If God created the perfect man he would closely resemble Creed, on the outside that is.
He’s as cavalier as they come. Unconcerned. Cold. Dismissive. I wonder if he has any feelings at all.
And when his lips touch mine, everything goes black. He takes me into his world, and it’s the most magical thing I’ve ever experienced.
And I’m sucked in time and time again.
Like a moth to the flame, I am ready to be set alight.
Elicea ‘F*cks With My Head’ Beckham
Elicea is a firecracker. She has piqued my interest, and no one piques my interest anymore.
Beautiful women are what I do—it’s my work.
Not one of them has managed to get their claws into me the way she does. It’s as if she’s seeing my ice heart and trying to set it alight with each touch of her sinful lips.
But that can’t work, it won’t work.
Not in my world.

END_OF_DOCUMENT_TOKEN_TO_BE_REPLACED

I had everything I needed, except freedom from my past—a past that suddenly feels like a ruse, ready to ruin everything I’ve worked for.
No matter the consequences, I’m determined to remove the chains binding me to my biggest regret.
I heard the warnings; I just didn’t give a damn, because casualties of war are to be expected.
But I never counted on meeting her.
One look, one taste, one night, and I discovered my mission is about to destroy my future.
Be careful what you wish for…

END_OF_DOCUMENT_TOKEN_TO_BE_REPLACED 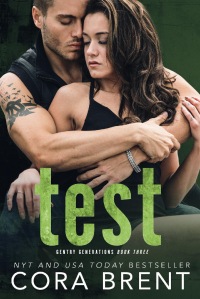 PAIGE
He seems like nothing but arrogance with a beer in one hand and some clueless girl in the other. I can read Derek Gentry like he’s a neon sign that says ‘I AM A TERRIBLE IDEA.’
And I’m not tempted, no matter how hot he is.
I’ve heard the rumors. I know his story.
But I’ve got my own scars. I don’t need his.
Despite his muscled, blue-eyed Adonis kind of staggering good looks, he’s heartbreak wrapped in a seductive package.
However I never planned on falling into his arms on the worst night of my life.
I never planned on initiating a chain reaction of events that neither of us saw coming.
And I never planned on needing him so much I can hardly stand it.
DEREK
Everyone has a history.
Mine’s a little worse than most.
I’ve hurt my family. I’ve hurt people I never knew. I’ve hurt myself.
And I’ve been hiding at the bottom of a bottle for so long I’m not sure how to do things differently.
Paige always struck me as the sort of uptight girl who would never give anyone a break. Little did I know what kind of mysteries she’s been keeping inside. Now I can’t get her out of my head.
We could help each other.
Or we could destroy each other.
Right now it’s anyone’s guess…

END_OF_DOCUMENT_TOKEN_TO_BE_REPLACED

Ingredients: one seriously hot chef for a boss + one sassy employee who always says what’s on her mind = a sexy and flirty romance about trying to resist the irresistible…

Finn King. He’s sexy, single, successful and hotter than anything that comes out of his kitchen. His focus lies on the perfection of his food, and becoming a celebrity chef. Women and love aren’t on his list of priorities until in walks Hailee with her smart mouth and flaming red hair. She challenges him at every turn, and he just can’t get enough of it.

Hailee Ferris doesn’t believe in fairy tales or happily ever afters. She learned that the hard way a long time ago. All she wants is to save up enough money to move away from the small town she’s felt trapped in her whole life. When she lies to get the job at Finn’s restaurant, the one thing she wasn’t counting on was falling for her boss.

When one accidental kiss turns their worlds upside down, now cooking isn’t the only thing heating up the kitchen…

END_OF_DOCUMENT_TOKEN_TO_BE_REPLACED 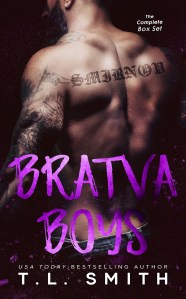 All four books in one box set.
Distrust
Disbelief
Defiance
Dismissed.
Their name has meaning, holds royalty. They aren’t to be trifled with. And if you get too close, prepare to be destroyed—they are the Russian mafia.
Gashes and bruises mean nothing to them, blood is what they live by. It’s all they know. So be prepared to enter the ultimate sin, because these boys will take you on a ride, one you may not want to look back on.
Prepare yourself to enter all things that are the Smirnov Bratva boys. But hold onto your panties and lock your doors because your world is about to be shattered.

END_OF_DOCUMENT_TOKEN_TO_BE_REPLACED 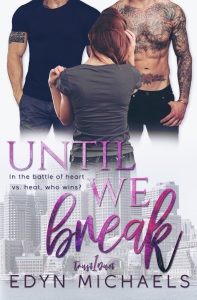 Mari was fast tracking to forever with her boyfriend of two years, until a former friend turned skank sent her some incriminating evidence that included her body bouncing on his dick.
All trust was lost in the male species, and she decided it was time to use men as they had been using women for years. The plan served her well for a while, with a lot of free drinks and evenings that ended up with her face down on a couch with a nameless guy pounding her from behind.
Her BFF, Kaylie, staged an intervention for her whorish ways… but then in the course of a week she met two men who challenged her heart and her lady parts in ways they’d never been tempted before. Suddenly she felt like a game piece, and she had to choose what team she was playing on.
#TeamJamison
Tall, dark and tattooed, Jamison loves one thing in life and that’s his Harley. He makes no promises other than a good time. There will be no promises of forever, and to hell with monogamy. But, if she spends a single night with him, she’ll be feeling it for at least three days.
#TeamDane
With a smile that could light up the darkest night, and dazzling blue eyes, Dane friend-zones her from the start. He’s been through his share of meaningless relationships, but the former star quarterback wants a chance at falling in love with his best friend, rather than chase the next piece of fine ass.
With an epic battle of heart vs. heat; whose team will she be on?

END_OF_DOCUMENT_TOKEN_TO_BE_REPLACED 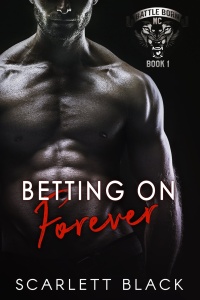 Alessia DeRosa is a full of fire and ambition. When life throws her a curveball, her pride won’t allow room for failure. Betting on herself, Alessia cashes out of the life she was dealt, picks up the pieces of her shattered heart and moves on to a future unknown.
Blade Johnson was born into the Battle Born MC. He loves his club life, and that is all he needs or, so he believes.
When challenges arise, and he doesn’t know who he can trust. Loneliness starts creeping in. That’s until one fiery brunette catches his attention.
Unexpectedly, the two meet, sparking desire and life back into their hearts and dreams. He can’t stay away from the woman who warms his cold heart. She can’t help but to bet on the strong man, and tear down the walls around her heart.