Has a new evil arrived, or an old terror returned?
Agent Danny O’Rourke only wants one thing. His sister, Aubrey, to come home. He couldn’t save her from being taken, but the least he can do is help her through her turmoil. Except one thing is standing in his way—the Caldwell family. He wants to hate Kat Caldwell the most, but no matter how hard he tries, he doesn’t hate her. He wants her. So badly. When he starts connecting the dots in his latest murder case, all pointing to Kat as the next victim, he’ll do everything in his power to keep her safe. He won’t fail her like he failed his sister. The closer he gets to the truth, the more he realizes he might be all wrong in his assumptions. He already lost his heart to her, but he won’t lose her to a killer.

END_OF_DOCUMENT_TOKEN_TO_BE_REPLACED

You think you know me? You think you know the things I have been through?
My life, like I said before, has been written through my sons’ lives.
But not all.
Once, there was a girl, who was left alone in this world to fight and defend herself.
She did exactly that and became,
Catherine Stern.
Becoming someone, I wasn’t, was not easy.
It came with strings that strangled every part of my old self out.
The girl I once was would have to be destroyed and replaced with a woman who would rule.
A woman who was a fighter and a survivor.
The problem is, I’m not sure I have what it takes to fight anymore battles and endure what is coming.

END_OF_DOCUMENT_TOKEN_TO_BE_REPLACED

Simone Levin had a dream job as a safari pilot until an unexpected pregnancy clipped her wings. Tired of juggling motherhood with her demanding flight schedule, Simone applies for an office job, unaware that her new boss is Carlo Carlevaro, the man who’d ditched her before finding out he’d knocked her up. Carlo returns to East Africa only to kill another fire—Ivory trafficking from his lodges threatens to destroy his company. Finding Simone back on the payroll comes as a pleasant surprise. As his employee, Simone is off-limits, but she is the only one he trusts to help with his undercover investigation. With time running out, Simone and Carlo strive to expose the trafficking ring, but working together rekindles their mutual desire. When Simone is implicated as a trafficker, revealing her daughter’s existence to Carlo seems inevitable. Acting on her instincts might come too late as the syndicate retaliate and hone in their threat. Will they survive to give their love a chance?

END_OF_DOCUMENT_TOKEN_TO_BE_REPLACED 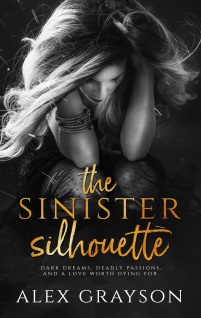 “Luca….”
She whispers my name at night, filling my dreams with her haunting beauty. Her tormented amber eyes
beg me for something I don’t understand, and her agonizing pain becomes my own.
For years, she’s come to me, calling my name.
For years, I’ve never known who she was.
Until now….

END_OF_DOCUMENT_TOKEN_TO_BE_REPLACED

He’d been mine—until I made the biggest mistake of my life.
I thought if I put enough time and distance between us, my heart could forget him.
I thought wrong.
Drake Foster owns my heart, my entire being. He always will.
As the pieces of what happened to us begin to fall into place, I realize our relationship had been sabotaged.
We’d​ been pawns​ in a game neither of us knew we were playing, and our relationship was the price we paid.
Now, we must find our way together ​before it’s too late.

END_OF_DOCUMENT_TOKEN_TO_BE_REPLACED 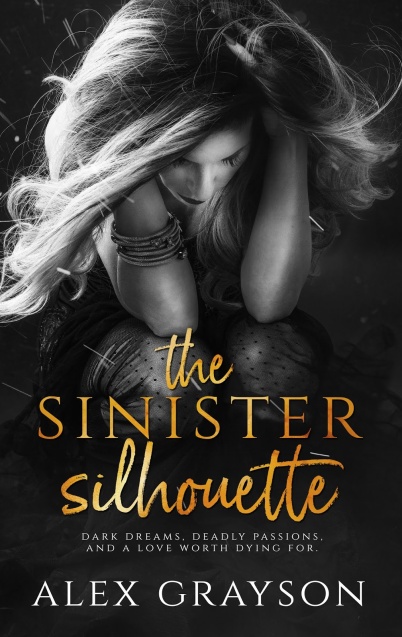 “Luca….”
She whispers my name at night, filling my dreams with her haunting beauty. Her tormented amber eyes
beg me for something I don’t understand, and her agonizing pain becomes my own.
For years, she’s come to me, calling my name.
For years, I’ve never known who she was.
Until now…. 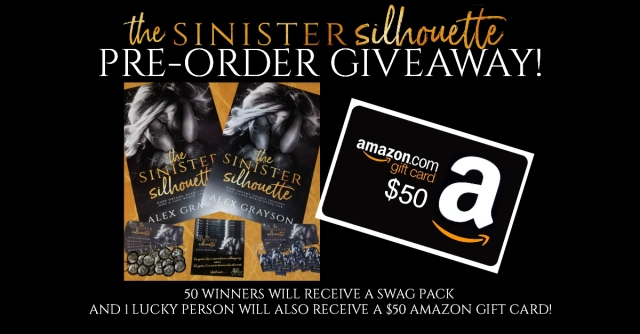 Alex Grayson is the bestselling author of heart pounding, emotionally gripping contemporary romance including the Jaded Series, the Consumed Series, and two standalone novels. Her passion for books was reignited by a gift from her sister-in-law. After spending several years as a devoted reader and blogger, Alex decided to write and independently publish her first novel in 2014 (an endeavor that took a little longer than expected). The rest, as they say, is history.
Originally a southern girl, Alex now lives in Ohio with her husband, two children, two cats and dog. She loves the color blue, homemade lasagna, casually browsing real estate, and interacting with her readers. Visit her website, www.alexgraysonbooks.com, or find her on social media!

This isn’t a love story. This is a story about redemption. She was lost and then she was taken. He found her twice. But will she ever be truly free again? How can you ever be whole after your entire world was ripped apart? How will they both survive the nightmare when they realize it’s not over? She loved him and he loved her. But it wasn’t that simple.
TRIGGER WARNING:
Triggers (for both part 1 and part 2): Rape, Violence, Assault, Mental/Emotional Abuse, Death, PTSD triggers

PROLOGUEThe moon hit that perfect point in the sky where its light trickled down and flooded the balcony, shining a beam of light into the bedroom. I peeled myself out from under Derrick’s arms, feeling the same drop in my stomach I felt every time he wasn’t touching me. I was a woman obsessed. I was also terrified of being separated from him again.

When he held me, I didn’t have nightmares. When his hands caressed me, the panic attacks ceased. With Derrick, I was able to forget what happened. I ached with the guilt of not telling him any parts of the ordeal. I knew it was killing him.

But I loved the way he looked at me now, like I was the key to his entire world. If I told him what Jason did to me, the things I’d done during the course of being held prisoner, that look would go away.

I couldn’t risk that.

I stepped onto the balcony, bathing in the moonlight. It was warm and there was a gentle breeze moving the clouds around. We moved to a new wing of the house and it was quieter here. The pool and pool house were right underneath us and I’d been dying to get back into it. Now that my ankle was fully healed, it seemed like a good idea.

There was no point in getting changed. No one ever swam in the pool anymore. I tiptoed down the stairs and padded across the grass to the stone slabs surrounding the sapphire tinted water. I let my nightgown fall off my shoulders and stepped gently down the stairs, wading out to waist level.

Spreading my arms out, I tilted my chin up, gazing at the stars as I fell back into the warm water.The temperature was perfect. I floated on my back, loving the weightless feeling it offered me.

God, how I needed to feel weightless. I didn’t allow myself to feel that way since coming home. There was too much blood on my hands, too many unanswered questions, too much left unsaid for me to spread that around for others to carry.

No, I would shoulder the weight of everything. It had to be this way.

I dove beneath the water, swimming a few laps before floating on my back. It helped soothe my grieving soul. My eyes burned from opening them underneath the water, so I stood in the shallow end rubbing them. Footsteps sounded on the stone behind.

Glancing over my naked shoulder, black boots stood at the edge of the pool near the deeper end. A smile tugged on my lips, assuming it was Derrick coming to join me. But I realized the body was different.

I began to tremble, my smile fading from my face.I recognized the all black outfit, complete with black gloves.

I opened my mouth to scream, but the man held a finger up to his lips, silencing me. Tears blurred my vision. I blinked at them, sending them splashing into the water surrounding me.

He came back for me.

I wasn’t going to survive this time.

“Alina?” a voice called out.

Derrick walked out onto the balcony. He hadn’t come to the edge yet, so he couldn’t see me down in the pool. I swallowed, unable to form words from the sheer terror of what would happen next.

When I glanced back down, he was gone.

That was my warning.

He was never going to let me escape anyway.

He was coming back for what he owned. 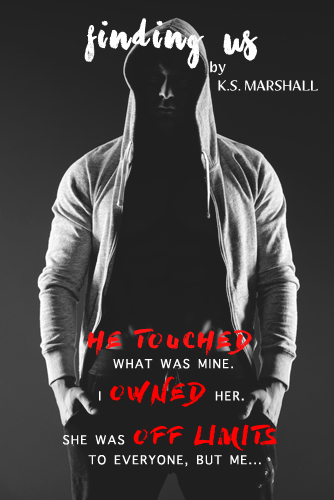 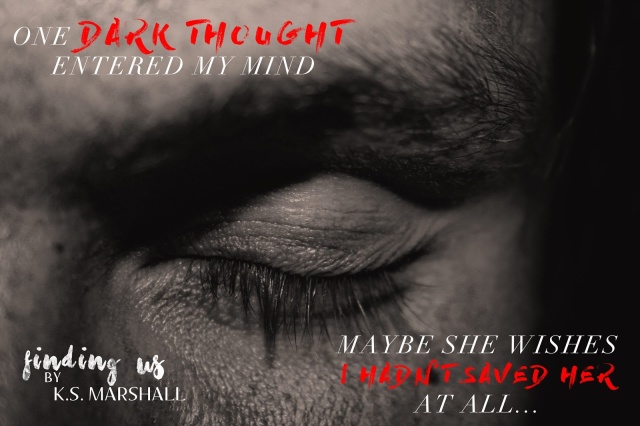 K.S. Marshall is West Coast girl with a heart for Texas, who found herself calling Pittsburgh, PA her home. Having grown up with an avid romance reader for mother, the pull toward the genre was automatic. She enjoys writing complex stories with dark elements that keep her readers on the edge of their seats. Life and love are both complicated and messy and, true to reality, her characters are authentically flawed.
When she’s not reading or writing another plot twist, you can find her having impromptu dance parties, eating her weight in tacos, and doing fitness stuff with her friends. She’s absolutely crazy over her children and her fur-babies, Luna and Weston. And that Sean guy is pretty cool too. 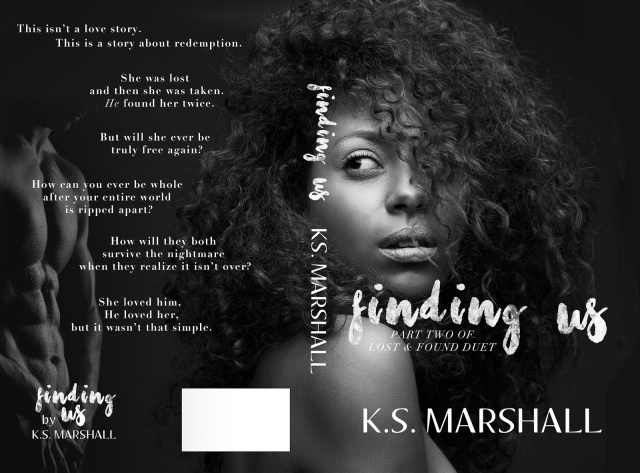