Big girls don’t cry.
They go after what they want. 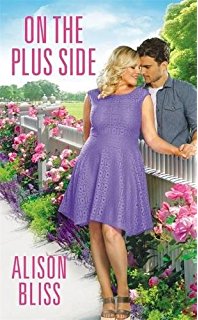 Thanks to her bangin’ curves, Valerie Carmichael has always turned heads-with the exception of seriously sexy Logan Mathis. Just Valerie’s luck that the object of her lust-filled affection is also best friends with her overprotective brother. But Valerie’s determined to get Logan’s attention . . . even if it means telling a teeny little lie to get a job at his new bar.

Logan can’t remember a time when Valerie didn’t secretly fuel all his hottest fantasies. Now the curvaceous she-devil is working behind his bar, tempting him every damn night. It’s only when he finds Valerie’s naughty things-to-do list that Logan decides to break every rule in the book-by making each red-hot deed a reality.

So I love the sibling’s best friend romance trope and anytime a story contains it and meets my other criteria, I can’t wait to dig in and get started. And when that childhood crush lingers, persists until they meet again…as adults? Well I am all over those stories! On The Plus Side started out great and I was intrigued with Valerie’s feistiness, her fierce confident attitude and her potty mouth! Valerie is a pretty great character who embraces her curves and makes sure the rest of the world does too.

She works at her best friend’s bakery but her real passion is bar work and when Logan needs a bartender she finally sees her chance to kill two birds with one stone. Work in the bar world while trying to get up close and personal with a grownup, sexier version of her older brother’s best friend.

Watching these two together was incredible. For the most part. I loved each of them but I felt there were plenty of times when they only brought out the worst in each other. Valerie is strong and independent, confident and sassy. Unless she’s dealing with her brother or his best friend, then they can treat her like a fragile piece of glass and she’s just supposed to deal with it. And she did! I just thought it was a strange thing for a woman like her to do, but honestly it just made me more invested in the story to see if she realized what she was doing. Spoiler alert: she did.

One of the things Alison Bliss did wonderfully was the heat between them and I’m not just talking about sex, which was also pretty damn hot. I’m talking about the way he stared at her ass, the way her gaze always lingered whenever he was nearby. And the list! Yeah that was a lot of fun.

On The Plus Side had plenty of heat and chemistry between the main characters, lots of fun banter and just enough drama to make it an all ‘round entertaining read. If I had any complaints it would be just how over the top her brother was, I’m mean so overprotective that it was almost creepy. We find out why but that doesn’t excuse his behavior as far as I’m concerned.

I just hope he gets his own story and Valerie reaps her revenge!!!!