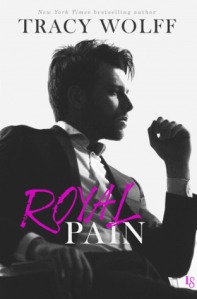 Being rich opens a lot of doors. When you’re rich and royal, those doors lead to a new bedroom every night. I should know. The tabloids call me His Royal Hotness, Prince Kian of Wildemar. Women across the world see me as a naughty fairy tale, an image I’m happy to indulge. As the spare to the heir, I’m the prince with none of the power . . . and all of the perks.

Then my twin brother is kidnapped, and suddenly I’m the one who could be king. The crown chasers start circling—and yet it’s a luscious waitress who catches my eye. With a smart mouth and the curves to back it up, Savannah Breslin is as brazen as I’d expect an American commoner to be.

But Savvy’s not interested in playing Cinderella. As sexy as she is, she’s no stranger to heartbreak. Besides, a nice guy wouldn’t drag her into all the drama that comes along with royalty. Lucky I’m not a nice guy. And, as it turns out, I might not even be her first prince…

So I should tell you all right now that I have a hit or miss relationship with royal romances. Other than Marquita Valentine’s Royal series, I find that royal-centric romance novels are a little too over the top for my tastes so I was a little hesitant when I came across Royal Pain.

One of the things I had to get over when reading this story is the first person POV which honestly, made it very difficult to like Kian who is supposed to be our hero. I don’t have a problem with Kian being a playboy or just a hard partying spare heir, none of that bothers me. Hell, I believe he’s earned that kind of lifestyle with the kind of restrictions placed upon royals. But hearing his inner most thoughts made it very difficult to sympathize with him, to give a damn about him.

At the start of the story I honestly liked Garrett more and was hoping he would come back and take Kian’s place. But I digress…

The story itself was…okay. I didn’t feel any real pull to Kian or Savannah and I didn’t really care about them. I finished the story more because I just wanted to know how it all turned out. Let’s just say there were some mysteries within this story beyond Garrett’s disappearance that added a few layers to the story, but overall I just felt meh about this story.

It is well written and the story is developed but I think Royal Pain would have been more compelling written in third person.